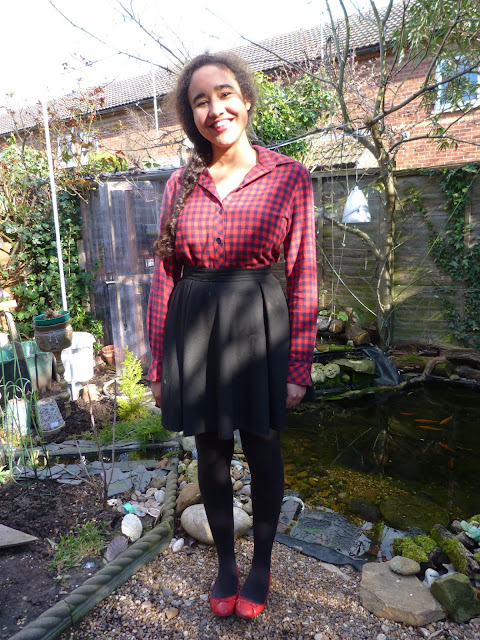 I'm a big fan of circularity. You know, giving and receiving, what goes around comes around, universal symmetry, the whole shebang. So it shouldn't be surprising that this entire outfit is a kind of giant circular nod to my new town.

It seems only right that on the train home at the end of T2 I stitched the buttons onto my brand new plaid flannel shirt... plaid flannel which was the last thing I bought before heading off, fresh-faced and dewy-eyed, to university roughly 6 months earlier. (6 month fabric turn around, not too shabby...) Oh and the skirt, you ask? Well, its hem was handsewn in a hotel room, last March-ish, the night before offer-holder's open day at the uni I now call home.  How's that for circularity!

See, it all comes around in a beautiful harmonious circle of destiny... or so I like to tell myself.
Anyway, onto the sewing... 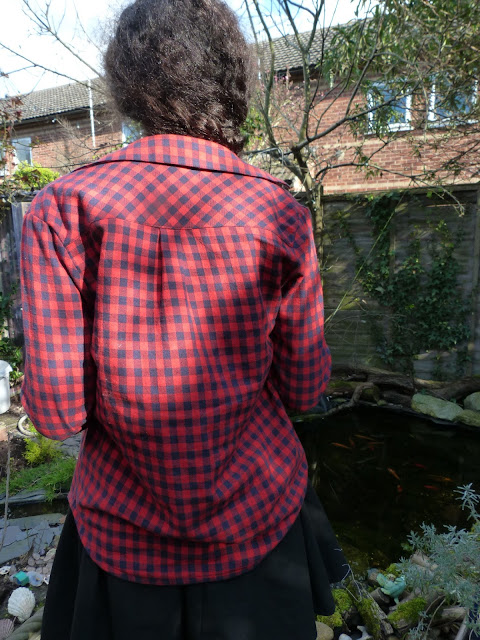 The shirt, as may be obvious from the blatant shirt monogamy in my archives, is another Grainline Archer in whatever size I always make. I mean why mess with a good thing?? It's true love I tells ya. This shirt has been on  my to do list pretty much since I got the pattern maaaaany years ago (read: three) but I was waiting for the perfect red plaid flannel to fall into my lap. (Sidenote: Wouldn't it be great if fabric just fell from the sky??.. Nope, just me? Moving on....) The urgency of the mission got kicked up a gear as I started prepping for uni. A plaid flannel shirt would obviously be what all the cool kids were wearing.... I mean it's the perfect thing to swaddle yourself in as you sat on the grass thinking deep thoughts about Foucault and what to make for dinner. It was clear I needed a shirt stat!

Serendipidously, John Lewis had just got in an order of John Louden plaid flannels and I snatched up 1.5m of this red colourway the day before I left. Stopping only for a brief  prewash in my parents' washing machine  (to delay the time when I would have to PAY FOR LAUNDRY *gasp*) I whisked down south and promptly forgot about my shirt plans, busying myself instead with wild student activities (read: Knitting and card making)


It wasn't until mid-February, when winter finally poked its nose out (gotta love the south!) that I finally picked up the idea again. From then on it was smooth sailing. Cutting out occurred on the kitchen floor on a Wednesday in mid-March and by the Friday the shirt was pretty much complete.

Construction-wise I kept things classy: french seams for the armscyes and side seams (Woop woop, french seams), the burrito method for the yokes (My first time, I'm now IN LOVE) and a bias facing for the hem to preserve a little length (I LOVE the slight pop of interest it adds to the inside. My trusty self-drafted tower placket saw some light and the back yoke, button band and cuffs were cut on the bias. Good stuff all round.


Obviously I couldn't get this far plain sailing, something was bound to go wrong. Oh pattern matching, must you be the bane of my life...? *sigh* So it turns out that in a fit of baffling ineptitude I managed to match everything except one side seam. I'd somehow managed to cut one half of the back off-grain meaning one side seam was off by EXACTLY one square. It's actually so perfectly mismatched it's hilarious.

So, in true Cam fashion I stared at in blankly in the fetal position for a while (immensely freaking out the engineer) before deciding to get on with it, pattern matching be damned!.. Except in my madness (read: plaidness) I was completely distracted and ended sewing my french seam WRONG SIDES TOGETHER.., aka THE WRONG WAY ROUND. Cue more fetal position and engineer hugs.

Luckily I caught it after I'd sewn the first set of seams, but it did the require the painstaking unpicking of 1/4" seams on an incredibly fraying fabric... then the tedious re-pinning to match up the plaids.... Then resewing the french seams. Not. Best. Pleased.


After that ordeal I wasn't really feeling button holes and wore the shirt open and buttonless for a week before I tackled them. Smooth sailing... see it's all about the cosmic harmony! Also the engineer let me use his scalpel to cut open the buttonholes and let me tell you that is some next level precision!

The only other minor... major hiccup was the colouring. See I'd been working on the assumption that the plaid was red/black, using black topstitching thread throughout. However, when it came to picking buttons the truth could not be ignored: it's red/navy. So,whilst this opens up my skirt matching possibilities it does mean my black thread and  navy buttons are at war. I'm also not sure about the button size. I went with 1/2" buttons, as stated in the pattern and thought there was something iffy. Cue the engineer pointing out that they're far larger than the buttons on men's shirts. I think the recommended size works a lot better for larger scale prints (see this version) but with the smaller check a smaller button would balance better. But there's no way I'm unpicking them soooo we'll just have to call it a design feature... 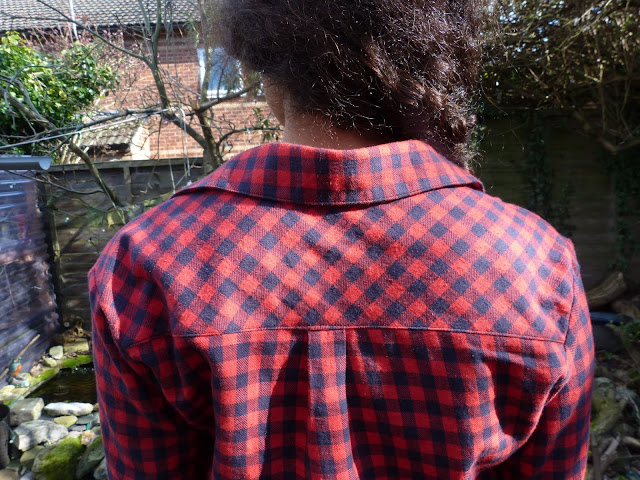 All drama aside, I love this shirt! It's exactly what I thought it would be, a comfy, warm wardrobe staple. I've worn it almost everyday this week, no shame. It goes with leggings, skirts, dungarees, even the Ginger jeans I'm making... and it's red so it matches all my shoes!! Total winner, plus I get a pat on the back from past Cam for finally executing her plan... You're welcome, past Cam, glad I could help.

One final mention for the skirt: I live in it! It's a half circle skirt with four 2" inverted box pleats (2 at the front, 2 at the back). It's a black rayon/spandex twill so it's comfy, drapes well and has A LOT of body in the pleats. Total wardrobe dynamite!Plus pockets, bias-bound seams, invisible zip and and hand-stitched bias-faced hem. I've worn it every week for a year without fail and show no signs of stopping.

So lets hear it for the staples! Sometimes plans just work out and I can tell you nothing fells as good as me-mades becoming the steadfasts you reach for day-in day-out... even if I you feel the irrational need to tell random strangers about your botched pattern-matching... Oh well, you can't win them all... 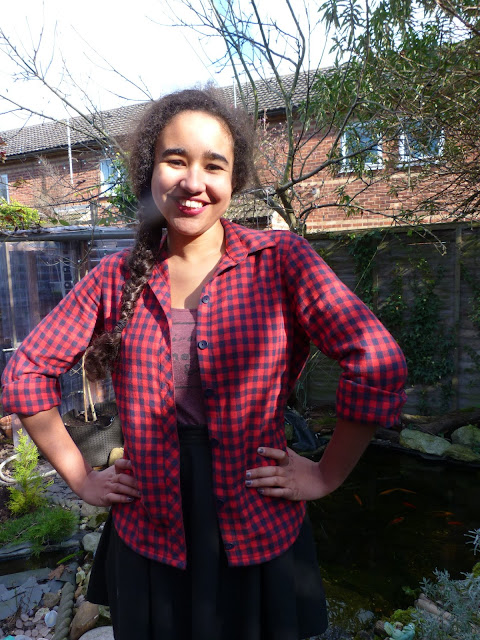 I'll leave you with the self-satisfied grin of a girl whose lipstick and shoes match her shirt perfectly!
Oh and a sidenote: I cannot get used to looking at my face without my glasses, it just looks weird...

Email ThisBlogThis!Share to TwitterShare to FacebookShare to Pinterest
Labels: Archer, Grainline studios, Made by me, Shirt, Skirts, Top

I miss you babe, and I don't want to miss a thing